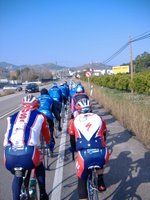 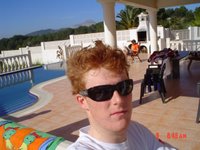 We just completed our first training camp of the new year in Javea, Spain. After only 2 days of being in Spain, we were already headed out to train with the big boys of the Discovery Pro Cycling Team. The classics team was there preparing for the upcoming spring campaign. They took us into the mountains of Spain and showed us how the pro's do things. Some damn fast dudes. Max Van Heeswijk, Stijn Devolder, Benoit Joachim, Matt White, Trent Lowe, Benjamin Noval, Roger Hammond, Leif Hoste, and Jurgen Van Broeck amongst others. John Devine, Matt Crane and myself joined them for a few rides during their week of prep before Ruta Del Sol stage race in Spain. 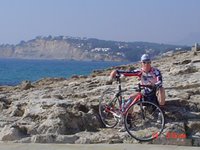 Other than that, it has been training as usual. With repeats up the 6.5k Col de Rate almost daily, we've been climbing and training hard. The weather was pretty amazing, and the views were spectacular. After 3 hard weeks of training, the team was starting to come together for our first race on Feb 26th. I'll let you know how it goes.
Posted by John Murphy at 9:46 AM No comments:

A New Year in Europe 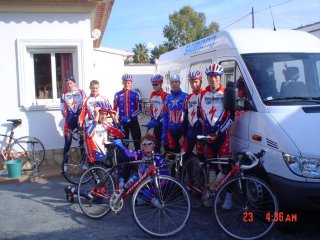 This is the first posting on my new blog site. I will be updating this often about my experiences this year while racing with the U23 National Team in Europe. I will be based out of our team house in Izegem Beglium. It's a small town that I will talk more about later. We just arrived yesterday from our training camp in Javea, Spain. After three weeks there, the cold weather here is a shock. I will go in further detail later.

Murph
Posted by John Murphy at 9:38 AM No comments: