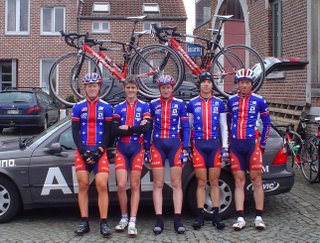 March 26th, 2006
The weather here in Belgium has gotten much better over the past few days. With temperatures nearing the 60’s, it’s nice to finally start a race without full thermal coverage. Matt Crane, John Devine, Mike Wolf, Sheldon Deeny and I compiled the team for today. Last Year Crane, Devine, and I help Tyler Farrar win this race, so we know the course and once again have big shoes to fill. The race consisted of the standard big loop with a few finishing circuits. This race put us on a 120k loop before hitting the 5 laps of 7.5k circuits. The race started and finished in the town of Sint-Truiden Aalst.

The race started with a “Belgium” neutral section over the first few kilometers. I say Belgian neutral because there was a cobblestone section and we were still were rolling at 50kph over them. Belgians don’t understand neutral. When the race finally started, we hit some pretty heavy crosswinds. Cyclingnews Pro team and a couple others put everyone in the gutter and the race was shattered. Once we hit the first headwind section, the main peloton had shrunk from 190 starters down to 50 riders. Sheldon had just returned from Spain and was our only rider not to make the front peloton. Crane and Wolf immediately hit the front and started chasing the break of 9 that had slipped off the front during the crosswinds. We brought the break down to as little as 10 seconds, but I guess at that point no one wanted finish the deal. By the time we hit the circuits, the break was back up to 1 minute. After a hard couple hours of chasing, Mike Wolf got a flat just a few k’s from the circuit. He made it back on, but it took a huge effort and hurt him for the end. 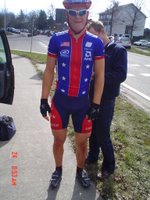 The Circuits had a 600 meter cobblestone section that lead into a hard left directly into a paved climb. The Climb was about 500 meters with a 250 meter false flat on the top. With the wind, the false flat on the top makes it the hardest part of the circuit. On the first lap of the circuits, I went over the top with a group of 15 off the front of the peloton. We were chasing the break, which had dwindled down to about 25 seconds. We caught them by the cobblestones on the second lap. On the climb the second time around, 8 guys from our 24 got a small gap. Directly after the climb, Devine came across to our group with 5 guys. So with 8 guys just off the front, Devine and I were in a group of about 22. Crane was in the group just behind, watching for anything else that may come across. Wolf had been stuck behind a split in the main peloton that would later be pulled on the last lap.

Some other guys bridged and our group swelled to about 30. Devine and I stayed attentive and followed some moves. Unfortunately, we missed two different 4-5 rider attacks in the last 2 laps. We came into the finish racing for 16th place, and I was 3rd and Devine 4th respectively from our group.

That put us finishing 19th and 20th on the day. We were both happy to be racing at the front at the end of the race, but still can’t help being frustrated about not doing better. We have the legs to be in the top 10 of these races, but still keep missing it. Every race we keep learning and getting better, so we are both super motivated to make the jump to the top 10. Triptique Mont Châteaux is a 2.2 U23 stage race this upcoming weekend that we are both super excited for. Last year Devine was top 10 there last year, so we will be looking to get him a high GC placing. I will be looking for a stage win and help Devine to a high GC position. Wish us luck.
Posted by John Murphy at 10:34 AM 2 comments: