USA Crit #2
After an easy 1hr spin in Athens Sunday morning, I made the haul back towards Atlanta for the Roswell crit. After Saturday nights Twilight Crit, I was a bit hesitant to race today. But shit, what else do I have to do? 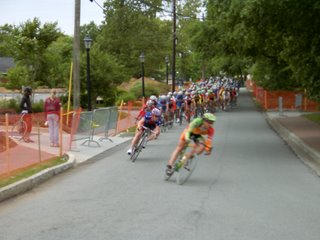 It was a dreary day, with the cloud cover threatening rains and storms most the day. Everyone seemed a bit tired before the race. Maybe it was from all the racing Saturday, or all the drinking afterwards; probably both. Showers were apparently holding off.

At around 6pm, the race started with Health Net’s Nathan O’Neill setting tempo on the front, daring anyone to attack. No one did. After about 15 minutes or so on the front, he finally pulled off and things started happening. Having no teammates in the race, it was another just sit in and follow kind of day. I figured with the presents of all the pro teams there wasn’t much for me to do anyways. Just follow the good guys. Simple enough right? 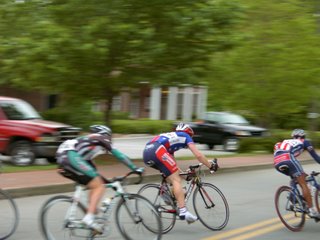 The race was pretty uneventful with any break coming back within laps until about 20 minutes to go. Four guys got off the front including Tour de Georgia stage 6 winner J. J. Haedo (Toyota-United,) Viktor Rapinski (Colavita-Sutter Home,) Alex Candelario (Jelly Belly) and the winner of Saturday's Athens Twilight race Vassili Davidenko (Navigators Insurance.). In my book that’s a dangerous move, but it wasn’t my job to chase, so I just watched. Priority health and Health Net did a superb job to bring the break back just before the last lap. That’s timing if I have ever seen it. I jockeyed for position on the back stretch hill, and came into the last two corners 15th wheel. Too far back, but what can you do. I sprinted up to 11th, just meters behind the winner Gord Fraser. The leg speed is starting to come back… 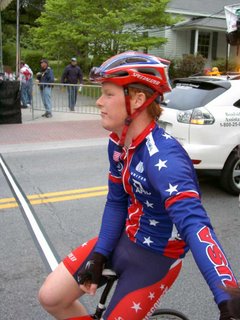 So the weekend of Athens Twilight is I think the most anticipated festival/race weekend of the year for most racers. With grid qualifying on the computrainer for the pro 1/2's, the greenway racing just outside downtown athens for the amateur events, and all the downtown crit racing, Athens is packed for this weekend. All the students from UGA are also out to celebrate the last big weekend before finals and the end of the semester. Put NRC points up for grabs in the Pro/1 crit in the darkness of 9 pm on Saturday night and your asking for a carnival for bike racing!

It all started for me with the computrainer TT on Friday. It was set up with 12 heats of 8 racers time trialing on a stage for just under 6k. For those of you who aren't familiar with the computrainer, is a wind-trainer that can change resisitance for hills and stuff. It also tells you your power(watts) and speed so you can race against your 7 competitors. From the 12 heats, the best 8 times qualify for the finals heat that night. Well, I won my heat with a time of 7:31 and an average power of 458 watts. Overall I was just a second behind 2nd place(Ted King from Priority Health), and maybe 5 seconds behind the winner(Matty Rice from Jelly Belly). Teddy King and I spend some time together over seas at the U23 team house last year, so it was cool so see him stateside. In the final heat, I was lined up next to Matty and Teddy, so after a bunch of technical difficulty, they finally started us around 9:15 pm. Ted set a blistering pace off the gun and pretty much rode away from us all. I did what I could but couldn't keep his pace. He rode away and put in the same time as earlier in the day of 7:30. I was slower with 7:45, but still good enough for 3rd place. Matty was second maybe 8 seconds behind Teddy. That's was a F*%$#%& hard effort. Glad to have that over. 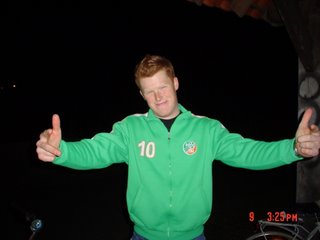 Great, now that was just to get to the line of the race the next night. I did a short spin in the morning just to keep the legs a bit warm. Then a little warm up just before the 9pm start with my buddy Tim Johnson, we were set for the big show. They called up the big pro guys at the race then us from the computrainer finals. After that, we were off. I started up front and stayed there. All the time I was just staying on the wheels and at the front. I was feeling ok, but needed to wait until at least an hour in to see how the legs were really going to be. 40 minutes in I made an effort to bridge to a break that looked promising. Almost making it across my legs were screaming. With the field charging on me, I waited and they eventually caught break. I had a feeling at the point I might be in trouble cause usually I can just to moves like that without such an expense. Not tonight. I was back in the bunch and new I wasn't good. It all started adding up in my legs and I knew I had no chance for the finish. I finished my bottle, took a gel, and hoped for a miracle to have something for the end. Then I saw we had 29 laps to go, and I knew I couldn't race that much longer and still have something for the finish. I decided to cut my losses and call it a day. Hey, I am not racing to finish I am racing for top 5! As soon as I knew that was impossible I pulled the plug. Oh well.

I'm racing again today at Roswell to try again. Then I'll be traveling around the southeast for the rest of the USA crit series. I'm hoping that the combination of this racing and some extra riding I can be super fit for the U23 Paris Roubaix on May 28th. I'm heading back over to Belgium on May 16th, so I'll be looking to grab as much fitness as I can while I'm back home. Hope to have to have good things to report soon. Until then....
Posted by John Murphy at 3:57 PM No comments: