Training Camp 07 Vid 1
Video sent by johnteamfisher
Posted by John Murphy at 4:14 AM No comments:

So I ventured to Greenville, SC for my first official race of the year. I lined up the lone Health Net Rider, with Jittery Joes rolling in 6 deep. So I knew I had my work cut out for me today, but decided I was just going to work myself over and see how it goes. I got into a break on the second of 8 laps. The lap was about 11k with a couple of rolling hills and some strong winds to make it tough. The break finally got established with four riders in total. Tim Henry, Scottie Weiss and I were laying it down with another strong rider that I'm not sure of his name. We got the break off to a great start having over 2 minutes halfway through the race. With just over an hour left of racing we were rolling strong. 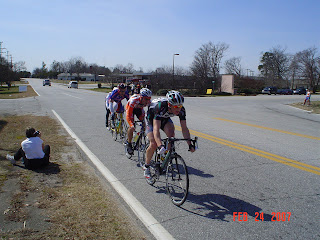 With two laps to go, the chase from behind started closing in. The gap was down to 30 seconds starting the final lap. At that point it was just Tim and I doing the work, the other two sitting on. We took turns just smashing it into the wind, hoping we could hold off the charging field. With 1.5k to the finish, a group of 8 or so came on us. I was displeased to see Jittery Joes had 2 guys in this group, giving me pretty low odds to cross the finish line first. I was instantly under attack by Cesar Grajales. I chased. Then Tim, and I tried to bridged after moments hesitation. Closing in on Tim, Cesar knew he had to bring us back to salvage the race, so he drove it to bring me back. As soon as I was caught, Thad Dulin launched a massive attack up the left side of the road, all the while looking back to see if I could react. Well I couldn't. He caught up with Tim and they just held the gap. With just Cesar, myself and one other rider left, I had to do all the work to try and bring it back. That was just not to be and Tim took the win in the first race of the year. I took the sprint for 3rd. It was definitely a great day of training and also to give the Joes a run for their money.
Posted by John Murphy at 2:49 AM No comments: