Coffee shop time back in Roeselare

So today we headed back to Roeselare to chill out for some coffee and maybe some pannekoeken(pancake). I had a pannekoeken and some cappuchino. The guys John Devine, Pat McGlynn and Brandon McKeever joined in for the coffee. 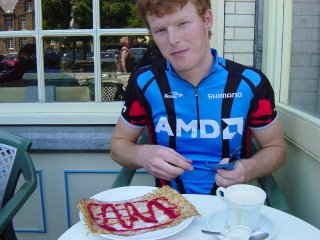 Then after some good times at the coffee/Pannekoeken house, we headed back to our town of Izegem. On the way we decided to sprint for the city limit sign. 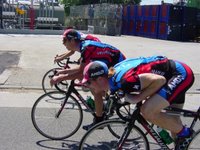 Luckily I took it... 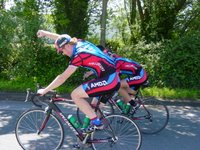 Tomorrow we are doing Cras Avernas 1.2. It's 200k's with pro teams like Lambowkrediet-Colnago, Unibet and Chocolade-Jacques. Should be a good time.
Posted by John Murphy at 8:23 PM 1 comment:

With Cras Avernas 1.2 this Sunday, I decided it would be a good idea to get a local race in before to keep the leg speed up. Luckily there was a crit in the town next door to us in Roeselare. It was a 65k crit with 1.4k laps. I started on the front row and jumped with the first move right off the line. The 50 starters were instantly strung out. I never looked back for the first 30 minutes just following attack after attack. Once all the favorites were up the road with me in an 8 person break, the race was shattered behind us. After an hour of racing, 1 rider got away and stuck it to the finish. My chain was skipping pretty hard core from a 1970 watt effort halfway through the race. I broke one of my chain links halfway like it pulled apart. That limited me a little bit, but I was still able to go hard as long as I sat down. So in the sprint I wasn't able to go completely flat out. I was just nipped at the line in the sprint. It was a hard race so I was happy with 3rd.
Posted by John Murphy at 9:59 AM No comments: 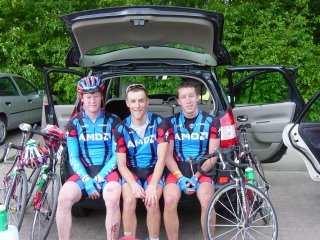 Fresh off training down in Monaco with my buddy Tyler Farrar, I arrived back at the packed U23 house in Belgium. I say it’s packed because we have 3 programs going for the U23 (15 riders), and 2 programs for the newly revamped junior national team program (10 riders). That’s 25 riders for a house that only has 18 beds. Yeah, pretty crowded.
Luckily 7 riders are in Spain racing so the house is just at 18 right now. Anyhow, Brandon McKeever, Ulrich Deyoung, and I were the national team riders for the Waver race. The race is 172k with 3 X 15k circuits at the end. With just a couple shorts climbs before the circuit, the race was basically just attack after attack. I was in several moves but nothing stuck. Once we hit the circuit, there were 20 riders up the road and we had no one in it. There was a 3k cobblestone sections just 2k before the finish of the circuits. After one lap of the circuits, I was sitting 15th wheel going into the cobbles. There was a big pile up about tenth wheel so I went hard right to avoid it. I almost did but just caught this guy’s wheel that jumped at me at the last second. I went down hard on the cobblestones. First my elbow hit and then my head. Damn, my head was ringing. I stood up and pulled the guys bike off me whose big chain ring had conveniently gouged into my left shin. Blood all over my leg. I got up and my bike still rolled freely so I got back on it. I rode eas 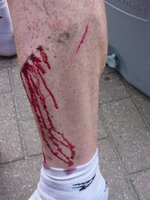 y until the whole peloton came by. With my head still aching I was pretty much just going to call it a day. After about half the caravan passed me before I finished the cobblestone section. Once on the paved rode, I took a sip of water and started feeling a little better. I decided to jump back in the cars and make a chase back on. After a few k’s in the caravan, I got back on the back of the main group. The 9 guys who were in front of the crash bridged up to the front group. Now there were 29 riders up the road and I was just looking to finish the day. There were also dozens of riders just up the rode from our group chasing the 29. I just rode towards the front and finished the race maybe top ten in our group. A few guys slipped away at the end so maybe I finished like 74th. I wasn’t hurt too bad but my helmet was from the crash. I guess it did it’s job though cause I cracked it in two places.

Next race is Sunday at Cras Avernas. I don’t know too much about it but it should be fun. Maybe some kermesses(local races) are on the menu for the week. Well see…
Posted by John Murphy at 11:56 PM No comments: