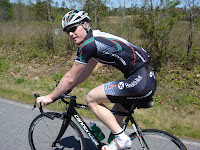 After 6 weeks of everything except riding my bike from my disastrous crash in Merced, CA, I began riding my bike again. I guess now I've been riding for almost 3 weeks, most of which has been just easy pedaling. After being sidelines for Twilight and Roswell, I took the frustration out on the pedals and it was actually pain free. I was able to get out those two days and really put in some good training. On Monday, I had my final check with the doc. The x-rays actually showed a second fracture on my pelvis that hadn't been seen before(Ah, that explains some pain!). Both fractures were ready to go and the doc gave me the greenlight to start racing. I decided to join my boys Frank Pipp and Kyle Gritters for the USA SE crit series. 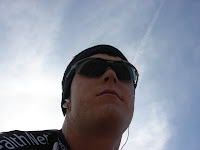 The first race in Beaufort, SC didn't go so hot. I was a bit freaked out about the sketchy course in the dark, so I decided to go from the gun. I covered attacks and attacked as much as possible in the first 15 minutes to try and get away and break the race up. Well that didn't work and I found myself gasping for air and going through the back of the field. I winded up getting lapped. They didn't pull me so once I got back with the group, I found my rythm and helped the boys out by covering moves. I tried to help Frank and Kyle move up the last couple laps and they finished 5th and 6th respectively.
The next night in Walterboro I took a more relaxed approach. I started in the very back and work my way to the front after about 20 minutes. The race was in the dark again and the back stretch didn't have a bit of light. It was sketchy to say the least. My goal was to take a couple primes and then try and lead out to the last two corners. I succeeded and got a couple primes but I started the leadout early and faded before I got to the last corner. The finish is not what we hoped for but we got some primes so it wasn't a complete waste.
In Greenwood I took an even more relaxed approach, only going for the midrace prime successfully. I stayed at the front at the end and between us we got 11th, 13th, and 14th. I seem to be getting stronger as the series goes on.
I took today(Friday) off for the weekend in Alabama. Frank and Kyle went home so I'll be flying solo. I can only hope I continue to improve and can't wait to try again.
Posted by John Murphy at 4:06 AM 1 comment: