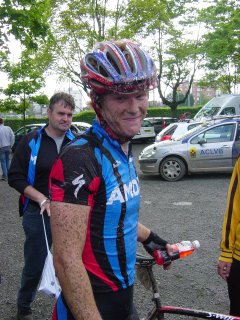 Paris Roubaix U23
May 29th 2006
Paris Roubaix is my favorite and one of the biggest races for me of the year. It had been raining in Belgium and our neighboring France for almost the whole week, but for this Sunday, Sunny. It was a pretty warm 65 degrees at the starting area. The USA U23 National Team is now sporting our new kits brought to us by AMD Computer Processors. Our team for the day was Brandon McKeever, Sheldon Deeny, Ulrich Deyoung, Chris (Cycling Center).

The course is 185k with the first cobblestone section not until 50k in. After that, it’s 21 sections all the way to Roubaix. It was a hard start with bad crosswinds after about 30k. The field shattered during the 20k section of side winds. Unfortunately there was already a break of 20 riders up the road. I was in the first echelon with about 18 other riders. We were chasing the breakaway but couldn’t quite close it before the first cobblestone section. This is where all the fun begins. 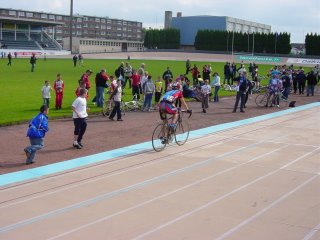 I started the first cobble section second wheel. It was hectic at first, but dry so we all stayed upright. The cobbles were amazingly dry considering all the rain last week. After the first 4 sections there was 25k of paved roads before the next section. The group was pretty much sitting up getting some more food and drink before we started the next long sections of cobbles. The break was holding at about a minute, but with over 100k to go in the race, it was no time to panic. Every section over the cobbles we would bring back 15-20 seconds, but then we sit up in the paved roads and the gap would go back up. That went on all day until we hit the 6th to last section. Attacks started in our group and it exploded. I was feeling good and was chasing the leaders with 4 other riders. No time checks so we were just going. Eventually we were caught by maybe 8 other riders and we had more attacks. The thing is they were hammering at the front and were putting time into our chase group. I think that unmotivated our group because we stopped attacking and more just tempo riding. It was good for me because over section 4 I lost my rhythm and was lucky to stay with the group. I think I was paying for hard efforts earlier in the day. I was hurting and now had to just sit on. We started catching riders from the breakaway who had gotten dropped. I think the break up front dwindled down to 12 riders. With 10k to go, I was chasing 7 riders from our group with 3 other guys. We hit a small climb with maybe 4k to go and I was dropped by 2 of the guys with me. I chased back though and caught them with 1k to go. When we came onto the last cobblestone section (which is just brick) with less than 1k to go, one of the guys attacked. The other guys wasn’t chasing so I had to jump to try and bring him back. I caught him on the velodrome crossing the finish with 1 lap to go. Rounding the last turn I jumped hard and he didn’t respond. I crossed the line 20th, legs still cramping. So that was the end of a long day in the saddle. I am tired and looking forward for some rest then get ready for next week’s race. Until then…
Posted by John Murphy at 10:25 AM 4 comments: