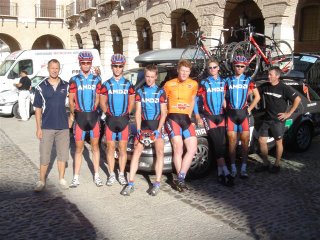 Stage 1- 30°C
I was in the break all day today. We reshuffled a bit and with 30k and had Crane, Switters and Rigges in the front. Switters and Riggs did a good job at the front keeping our small group of 35 off the front of the race. Crane helped me for the points sprint in the final 20k. I won it pretty easily. It is good because the guy who beat me in the first sprint was behind me. I don't think he could come around. He beat me in the first sprint because I didn't know it was coming and he already attacked hard. In the finish I was forced to do more work than I would have like. On the highway coming into the finish I found myself closing more gaps than I would have liked cause there were 4 guys dangling off the front. I had the legs to win, but I needed someone else up there to cover the moves. Then all the sudden there was 400 meters to go, and I was like 12 guys back. We were sprinting for the win, but I was so far back I could only get 5th or 6th. I feel strong and fast, so the race is beginning for me. I'm going for it. 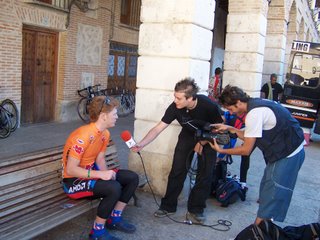 Stage 2- 30°C
Todays stage felt a little harder than yesterdays. To begin with, it was much windier than yesterday, and also the climbs were more sustained. I winded up winning the first Sprint Points and took the overall lead in that compettion. In the end, there were a few guys off the front. 8 I think. I winded up 15th on the stage, and now in the lead of the sprint especial jersey by two points. That is now my focus and won't worry so much about being in 12th place on gc. It's possible I can get closer to the U23 jersey, but I think it's best if I focus on the sprint and just roll with that. That will mean I am staying at the front of the race and thereby staying in a good position with GC as well. 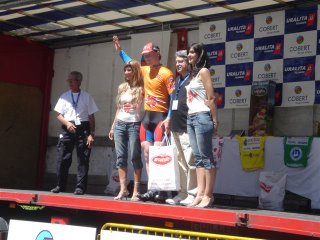 Stage 3- 33°C
So today was my first official day leading the points competition. It started off pretty bad when we were got lost trying to find the start and arrived 15 minutes past the schedule start. Luckily they waited for us, so we were able to start the stage. I was feeling ok in the beginning of the stage. Crane got in a 3 man break that lasted 80k's. After 75k's we hit the 2nd climb of the day, and it ended my day. I survived until like 800 meters to the top, but Sheldon was with me to help me back on. Also Riggs was there so they both paced me back on the the group. The thing is that we had like 20k of crosswind, and I was just empty. I winded up losing touch with the front group and waiting for the next group. We had 3 guys there, including Riggs, Bolian, and Switters. I knew I was done, so I just figured we would roll through until the day was over. After a while, Crane winded up coming back to us too, exhausted from the break he was in almost all day. Sheldon Soldiered on and finished in the front group for a 11th.I lost the jersey by I think 1 point, so tomorrow I am going to give it everything I have to get it back. 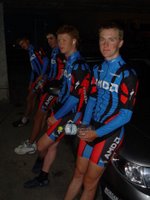 Stage 4- 30°C
The final day of the race was gonna be a hard one. I was one point away from the sprint jersey, and there was a pretty hard climb before the first sprint. Actually it was the climb I got dropped on yesterday, so I was a bit nervous. Turns out, we hit the climb, and I was dropped with a big group. 25 guys rode away from the field. After less than 50k the grouppetto(dropped group) had formed and we were already going easy. So much for the points jersey. I gave it a shot but in the end I didn't have the legs to hold on to it. The front group actually dwindled down to 20 riders, so in the finish I decided I might as well sprint. If there were 20 riders up the road, I figured it would be with it cause they pay top 25. I was 2nd in the sprint, so maybe I finished around 22nd. I was ready for this race to be over and get some rest.
Posted by John Murphy at 12:25 PM 2 comments: