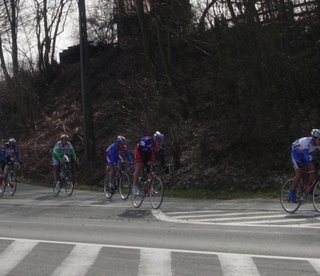 Waregem is a 1.2 U23 race, which is one of the biggest races on our spring calendar. Our team today was Matt Crane, John Devine, Ryan Keels, Chase Renick, Mike Wolf and I. It was a chilling morning, with temperature barely over freezing. But it was a sunny day, so it was nice.

The race is 150k, with cobble stone climbs including the Aikenburg, Old Kwaremont, Patersburg, knoktenburg, and a couple others. The Aikenburg comes about 60k into the race, and after that we hit all the climbs in the next 30k. The After all the climbs, you hit the finishing circuits after 120k. They consist of two 15k laps with one section of 1k cobbled and two small climbs in succession. John Devine and I were supposed to sit back and wait for start of the climbs. Mike Wolf and Matt Crane were managing the breaks until the climbs, and were very active. Keels and Renick are here for experience, making sure to stay towards the front and hold on as long as possible.
Wolf and Crane did a great job following moves before the climbs. Nothing got away, so when we came into the climbs, Devine and I were getting ready to throw down. With 5k to go before the Aikenburg, the fight for positioning was full force. We all hit the climb in the top 20, and went over it without trouble. No major splits happen, so it was most likely going to explode of the Old Kwaremont and the Patersburg. It’s always a tough fight for the front on the Old Kwaremont, so I was aggressive to make sure I was there. Both Devine and I hit the start of the climb top 10, right were we needed to be. I wasn’t super on the climb, so I went over the top with a 10 meter gap to the front 8 riders. There was a small cobblestone section right before the Patersburg, and my group of maybe 5 riders bridged to the front 8 riders. Coming in the Patersburg, I was just recovering from going so deep for the last few minutes. I felt better on the Patersburg and passed a few guys that were going nowhere. The problem is the rider right in front of me, from Davo, let a gap open to the front 7 guys. When we came over the top, there was 15 meters between us. I immediately jumped, but with crosswind I was going nowhere. I had to sit up and wait for the next group. Matt Crane was in the group that came up to me. We hit the Knoktenburg 5k’s later. It was a paved climb, but still very steep over the last 500 meters. The front group swarmed to 28 over the next few kilometers. Crane and I were hurting missed all the moves that went across. I was hurting pretty bad at this point, so I just ate some gels and just held the wheel in front of me. As we were approaching the circuits, the break had 45 seconds. Roubaix cycling team had completely missed the break so they were chasing. Right before the circuits, we hit a cobbled climb. I attacked to break the group up and try to go across. Over the top of the climb, I was by myself and clear from the group. I put my head down and started to time trial all out. After 6k’s of chasing solo, a group of 6 riders caught me right after the start/finish line. There were two Roubaix, one Veneeu, one Pictoflex and another rider with me in the group. We chased break down to 30 seconds coming into the cobble stone section on the first lap. We hit the two climbs 2k’s after the cobbles, and apparently front group had started attacking and shattering. My chase group started to get unmotivated, so the time starting going back up again. We never caught the group, and apparently it broke into several pieces. After the first lap of the circuits, I was blown. John Devine finished 13th on the day, just a few seconds down from the front group. I was 36th, 4 or 5 minutes back. Today was an ok day from the team, but we should have had another rider with Devine in the front group. Thank for reading.
Posted by John Murphy at 10:31 AM No comments: 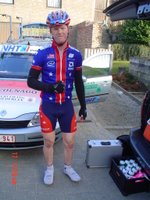 We awoke for a race morning finally with a forecast to be in the upper 40’s. We were all happy because that is actually warm for us here in Belgium. After an hour and a half drive, we were discouraged by the car temperature gauge reading 32 degrees. Damn Clouds.
Our team was very strong today, consisting of Mike Wolf, Matt Crane, John Devine, Zach Taylor, Ryan Keels and myself. The goal of the day was to be very attentive from the gun and not let anything get away without at least one of us in it. Pretty simple. Today’s race was 150k with a few climbs ranging from 1-2k.

The race started hard from the gun, as expected. While some of our guys were struggling to reach the front in the strung out crosswinds, Crane and I were jumping with moves and being very active. A crash maybe 5k in put half our team in difficulty. John Devine went down hard in the crash, requiring a bike change. Zach Taylor and Ryan Keels were also caught behind. They were in the chase group behind the attacking peloton up front. After a few unsuccessful moves with Wolf and me in toe, Crane found the right combination and made the break of 21. We would have like to have had more, but were happy with Crane there. Our mission for the rest of the day was to follow wheels to go across to the break.

Soon after the first climb of the day, Devine finally bridged on to the front peloton, now consisting of Wolf, Devine and me. We immediately hit the second climb, and this was the longest and steepest of the day. All three of us were at the front to make sure nothing got away without us. I followed a move a few k’s later consisting of 3 other riders, one of which was Steve Cozza, my teammate from the national team last year. He is now riding for the Continental Team Colba. He had one teammate with us and there was one other guy. They were doing the majority of the work, so I was getting a free ride. Noel came through the radio a few moments later and said Devine was in a chase group on their way up to us. We needed more guys if we wanted a chance to go to the front group, so this was a good situation. When Devine’s group caught us, we talked for a minute and decided we didn’t need to work too much. The group had a well organized chase for the next 30k or so. The break had one minute and thirty seconds with around 50k to go. Our group kept rolling through, but we were not chasing at the rate to bring the break back. They kept getting more time, and by the time we hit the 3 X 7.5k circuits, they had 3 minutes. With less than 25k to go, it was surely gone.

On the last lap, Devine went with a group of maybe 8 or 9 riders. They got a gap quickly and behind we just watched them go. Devine finished maybe 5th or so in the group for around 26th place. I think I was second in my group for around 30th.
Up ahead, Crane was put in difficulty in the last few laps of the circuits. He was forced to try to bridge to a front group of 12 riders solo, which didn’t pan out. Once he was caught by the remaining 11 riders, he was blown. He held on, but was finished 20th. It was a great ride for Crane and without a couple of tactical errors in the last 20k, he definitely could have gotten a top 10.

Our team is looking strong for GP Waregem 1.2 U23 on Wednesday. We will be taking a day or two for rest and then back to work again. I think we showed we have the strength today and will be putting it on display again on Wednesday. Until then…